It has been incredibly difficult to keep up the pace of writing with the days in HK. It seems likely that this may be similar to Square Enix’s botched job with Final Fantasy XV, where a lot of time will be spent in revision to overhaul some of the events, and add more content!

While that will really have to be a longer term goal for now, the purpose of Day 4 perhaps is to offer a review of the Kiangsu Chekiang and Shanghai Residents’ HK Association Restaurant. 蘇浙 (Read: Soh-Tzeet). Much easier in Chinese right? Located at Manning House in Central, the restaurant offers a strong historical tapestry of Shanghainese cuisine.

A disclaimer – this restaurant requires club membership. There are no walk-ins. Finding a friendly relative with connections sufficed in our case! 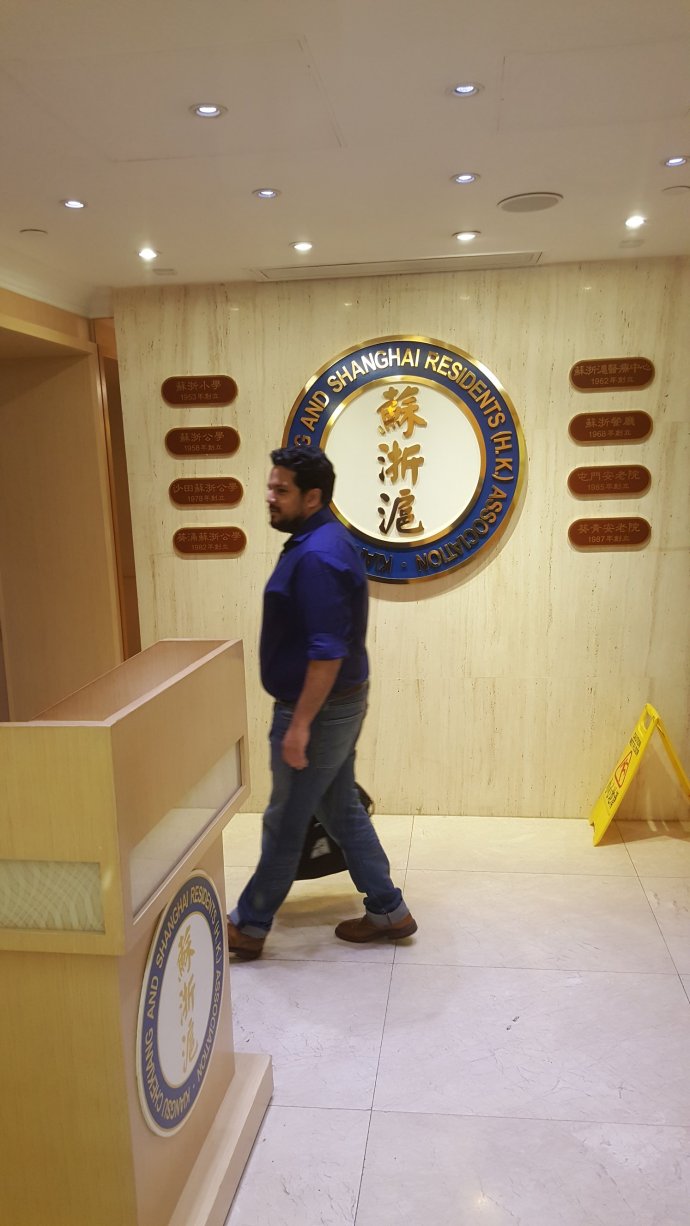 Let me just casually sashay into a philosophical rant about how personal good reviews are. Dining is a very specific experience – it is entirely dependent on one’s preferences and inclinations. This makes reviewing certain dishes more difficult, particularly those of an”ethnic” dimension which may incorporate particular flavours or textures that may be alien to the uninitiated.

I feel that Chinese cuisine is truly extraordinary in its scope, or breadth even. There are generalisations about Canton and Dim Sum, Shanghai and Dumplings, and Sichuan and Hotpots, but Chinese food is so much more. These inferences are not always wrong, but oversimplifying things into groups can be an error in oversight. means that you may miss out on trying something seemingly hidden in the menu.

After another random intermission of Iranian guy pictures, the appetizers arrived. Braised ham and smoked chicken eggs. Sounds fairly unremarkable right? The texture of the ham is slightly stringy like beef jerky, but much softer. The porkiness is instantaneous to the taste buds. It is a flavour I associate with well, given the common use of braised ham in Shanghainese cuisine – often shredded and used liberally as part of a soup base for dumplings and vegetables. I would say that the smoked egg is the more special item, with a similar texture to the semi-soft boiled egg used in Japanese ramen. As the name implies, the smokiness sets it apart. The charcoal-ly scent is obvious. A dash of salt and pepper that comes with this dish brings it together. It is so simple, but the soft yolk and slightly firmer egg white offers a lovely accompaniment of textures. And I’m reiterating how much I like that scent, and how you can almost taste that aroma of smokiness.

The pork and vegetable wantons in chicken broth came next, and this was a perfect transition between heavier courses. The filling of the wantons were key here. Some restaurants skimp out on the minced pork filling, which leaves their wantons tasting almost powdery. These ones were decent, substantial almost, if that is a term, to bite into. The broth, again laced with the taste of braised ham, was accompanied by pak choi. A nice second dish that isn’t too heavy on the palette.

Next up was the sautéed (?) river shrimp in spring onion/scallion oil. It is usually more common to find this type of shrimp in dried form, often as a condiment of sorts in fried rice or vegetables. In this case, the shrimp were fresh with a slight crunch. The flavour was relatively subtle, with a hint of spring onion. The vinegar added a little more zing to proceedings.

The two dishes after were not as good. The braised pork trotter cooked in dark soy was a bit too rich. The meat off the bone wasn’t soft enough. The shredded tofu cooked in a ham and vegetable broth was also a little so-so, but it may have been the wrong season for a wintery dish. The same could be said about the Chinese rice cake cooked in dark soy sauce with shredded pork. If anything, the soy was a little overpowering. The rice cake wasn’t quite springy enough. 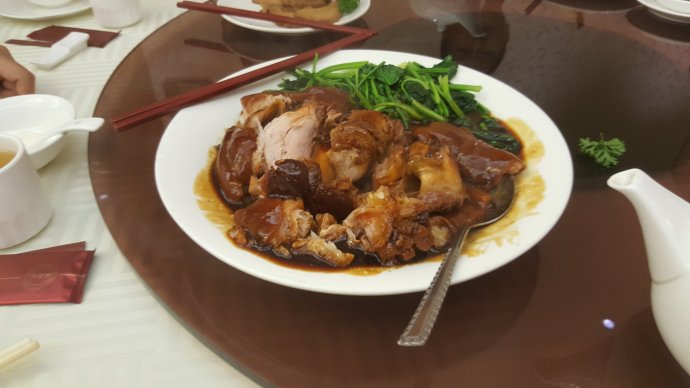 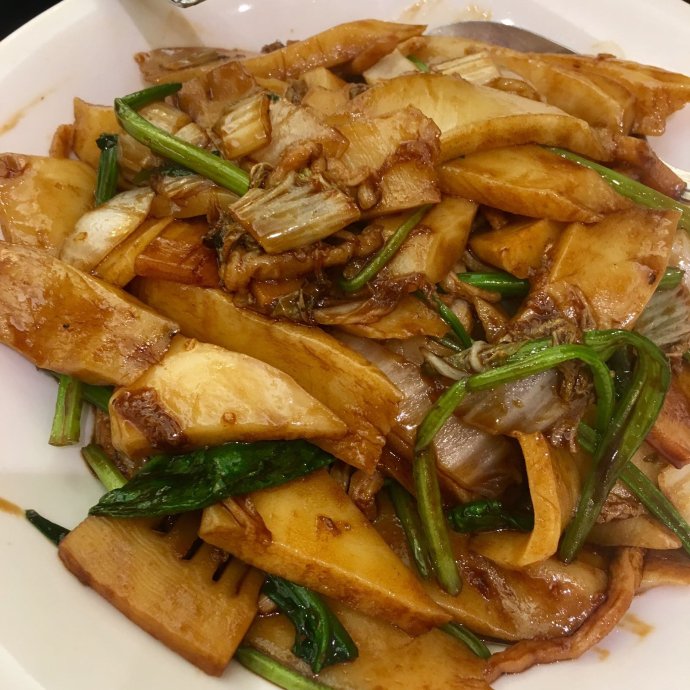 We now move towards more traditional fare. As with any Shanghainese joint, the dumplings and buns were very good. The Xiaolongbao was definitely better than Din Tai Fung, but I may have to revise my opinion after Taiwan. The pan fried steam bun had a substantial pork filling that went well with the crispy base of the bun. The vegetarian bun was highly fragrant. It packed green oomph. While I’m not really a fan of purely veggie buns, the freshness definitely made it worthwhile. 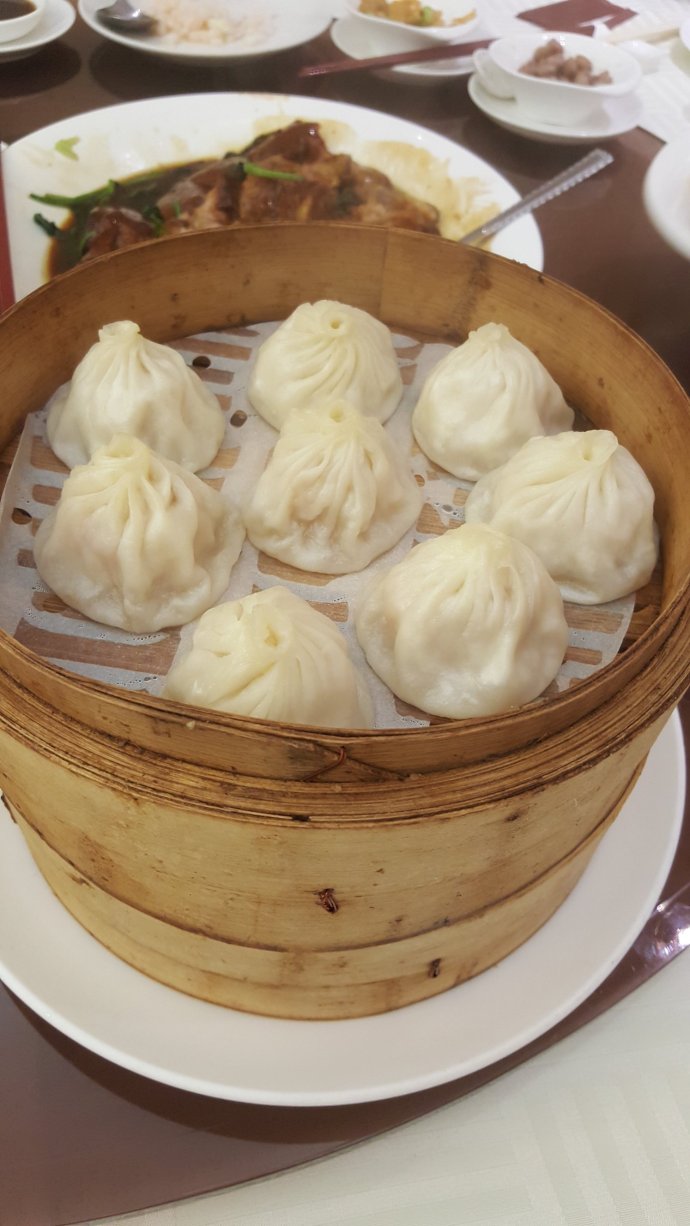 AND FINALLY, we move onto dessert. Red bean filled whipped egg whites, coated with powdered sugar, which were flash fried wok style. They were as much of a mouthful as my description. The texture was like soufflé, but the deal-breaker is probably whether one like red bean in the first place. I’m generally not a big fan of Chinese desserts, but this was a nice way to end dinner!

P.S  I hope this makes better reading than writing. It became a mission to recall each dish in detail!